Her men and children are but memories. Bliss to be alone.

She reaches for the weeds, one by one, as if addressing them singly here in her vast garden excludes her, releases her even if fleetingly from any thoughts whatsoever, frees her from being boxed within the cloister of her past. Wishful thinking! The men, marvelous to miserable, no longer hanging upon her and she on them, now loom damnably outsize in her weary head.

So here she squats in her lush vegetable garden instead of over some lover in bed. I’m more than enough company for myself, she thinks, shifting to the next row of salad greens threatened by crabgrass.

Enough chard for an army. Ludicrous. She wonders if there’s an enticement she could rig up for rabbits or deer to share in the bounty.

Oh the reckless, fantastic sex with Harold unearthing that buried treasure in her body. Mostly it was the sheer thrill of him masquerading as her “beau,” an endearment likely still in fashion among his family and hers, the Boston Brahmins whom she eventually fled. Golly they had them all fooled, off to the dance indeed!

Even though her knees are cushioned with thick squares of foam, she wonders when they—the knees not the foam—will collapse. The soil is wonderfully moist from recent, gentle rains, and so the weeds slip right out. She takes her time; what has she got if not time? Gripping the stem and pulling not yanking, the weed and she become one in purpose, like the pistols of a flower aligned with the beak of a hummingbird, seemingly disparate but all of a piece.

On the other hand she can see the hummingbird bedeviled in its frenzied pursuit. Also with this ant here struggling like Sisyphus, its cargo thrice its size.

Listen to yourself, she chuckles, crawling on to tender asparagus spears being strangled by vile witch-grass. Harold, light years ago! As if the juices are still flowing. Companionship could be sweet, she supposes. What, corralled with others my age in a “home”? Facing day in, day out, those with rigor mortis of the mind let alone the flesh?

Fred lightens the moment, avoids what is brewing in his belly. He recalls a quip from a colleague in his ad agency days on managing a marriage like a brand: every now and then it has to be “new and improved.” Of course to Fred that begged the question of what sort of dregs customers been swindled into buying all along?

He can almost swoon beholding sweet June as she reviews prospects for Christmas. She’s unchanged from the college cafeteria to now, a Miss Universe then compared to the smart-aleck, bespectacled coeds he was expected to date, and did, until he met her. Embarrassing, his occasional birthday gift of a sexy dress or piece of chunky, hip jewelry he’d foist on her, things she never wore. Sexually gentle was good, had worked forever, him adhering to the original counsel from Playboy, thereafter the reams of women’s magazines vilifying hoggish, clueless men in bed. He’d actually hurt the high school girls who lured him so they could lose their virginity. A married man in midlife, enlightened by the women’s movement? Easy does it.

Bottom line, he wants to stay faithful to June, mated for life, each to be witness to the other’s demise.

“Oh, and Fred. How about I go alone to the movies, the James Bond a must-see according to Freddie? I know this weekend is the last time for that Turner show at the museum you’ve been hounding yourself to catch.”

He sits upright, having been slumped. What am I about to say? That nearing fifty I’m admitting the darkening of my dreams, potential rightly claimed by people half my age, but for me? The errors of his youth he saw as detours; an error now is a dead end. Do you believe she’s too fragile to hear the truth? This is my problem, not hers. And a disservice to June not respecting her god-given resilience. He could add coward to his litany of shortcomings.

“June. We need to talk.” He hesitates, she’s rapt. “I think I need to rent a place, nothing but a studio, well, actually live there…fulltime…for a while…see how it goes. I—I need to do this, June. Sweetheart. This is so fucking hard. Help me if you can. Let’s just think about it. I know I’m out of my mind.”

June gets up from the table and clutches Fred from behind. She squeezes him, the most of a hug he can remember. He wrestles himself up, shaking, to face her and return her grasp best he can. His eyes are blurry but he sees hers, clear, open, both alert and at ease.

“Oh dear, this is so difficult, changing poses every minute!” gushes the middle-aged lady to his one side. “But that’s good, isn’t it? Forcing us to…” She makes mad strokes on her pad while jabbering on. “I thought it would be another woman, I mean female, it was the last two times. But this man, well, it’s another matter!”

“Shouldn’t be,” mumbles Fred to be polite.

“I know, it’s just limbs and angles and… I hope the instructor switches to five minutes, then ten, so I can concentrate! Golly.”

The twenty-some people in the figure-drawing workshop are flipping pages, furiously sketching. He ceases to hear the woman’s patter. He likes the rhythm, the loosening of his arm muscles, smudging the spine one minute, fleshing out a thigh the next.

The white-haired, elderly woman at the desk to his other side has been drawing ever so gracefully, he’s noticed out of the corner of his eye turning pages. None of the slap-dash of himself and the others. He sidles over to this woman during the break, mostly to avoid the motor-mouth. The lady smiles up at him, fine bones of her upper chest exposed by a stylish boat-neck sweater.

“Can I have a peek?” he says. “I’m going like a whirligig by comparison.” She’s lots older, he realizes, her thick mass of short-cropped silver hair so luxurious that at first he thought she might be prematurely gray. There’s an unforced vigor to her upright bearing.

She lets him page through her sketches.

“You’ve only made three or four lines,” Fred remarks, “but you’ve captured the whole. I’m straining to get the arm angle, the elbow, just right.”

“There is no right,” she says, sighing, “is there?” She’s folded hands loosely in her lap. He’s struck by leathery-brown of her face defied by the radiant mop of hair, sleek as satin.

She shakes her head, the hair glistening like a jostled Christmas tree of tinsel and distracting Fred. “It’s not necessarily a figure. For me,” she offers. “It could be the twist of a vine. And not even that.”

“How so?” He’s hunkered down his looming frame to better level their positions.

“First off, it’s a Rorschach test. What am I seeing, feeling, at this moment? If I’m tense or upset, I think that would show itself on the paper.” Small but classy gold hoops pierce her earlobes, yet another disconnect between her apparent age and hip appearance.

“You must be quite mellow,” Fred chuckles, instantly flagellating himself at the presumption.

But she chuckles, too. “You know, it’s not always about simplicity. Thank you for saying what you did about my sketches reduced to a few lines, but it could just as well be thousands. I remember that one of the Austrian emperors told Mozart he had too many notes. That they obscured a clear, clean melody. Imagine!”

“There are, what, a few dozen of us here,” she says, “and likely no two drawings the same. I’m glad many people pin work up at the end so I can delight in all the difference.”

“I better sit down. Nice talking with you—oh, I’m Fred.”

“Roxie.” Again she smiles sweetly, crinkling her eyes which seem fixed in a mode of amusement. “Now, Fred. Relax. Enjoy. Let your hand be limber, your mind taking a break.”

He delves back into the longer poses for the second half of the session. No, don’t delve. Flow. Listen to the lady. The guy’s neck, the nose, it’s not necessarily a man. It’s a mood, express that or not, but let go. Be a medium through which stuff deep down gets an airing for a change. No destination, just some art taking place. Who knows? This detour in his home studio routine might unchain him from acting like a rat caged on a lab wheel.

Finally he gets lost in the moment.

An hour later they are gathering themselves and their materials, paying the instructor, signing up again. Several of them are perusing samples of today’s outpouring voluntarily posted, the Chatty Cathy among them freeing up Fred to have a final word with the amicable lady.

“Excuse me, Roxie,” Fred says and bites his lower lip, indicating the final page of her pad. Although just a few lines, the sketch is unmistakably a penis.

“Well,” she sighs. “He was so enormously endowed. I suppose that’s what caught my eye this time.”

Fred’s face is immediately aflame but he laughs. “Fair enough. Not the whole but a part.”

Roxie shrugs. Her beautiful smile eradicates decades. “I’m not usually so literal. His business end…that’s all so long ago. Maybe I needed a refresher course.”

He flushes again, more sparked than embarrassed by this perspicacious dame. “See you next time, Roxie?” asks Fred, he hopes not too expectantly.

She shakes her snow-capped head in the affirmative. “Maybe it’ll be another man.” 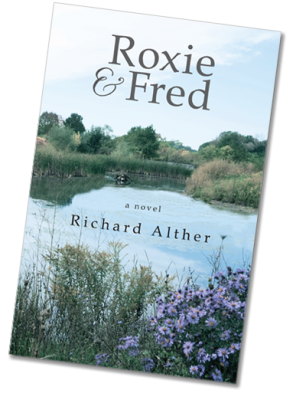